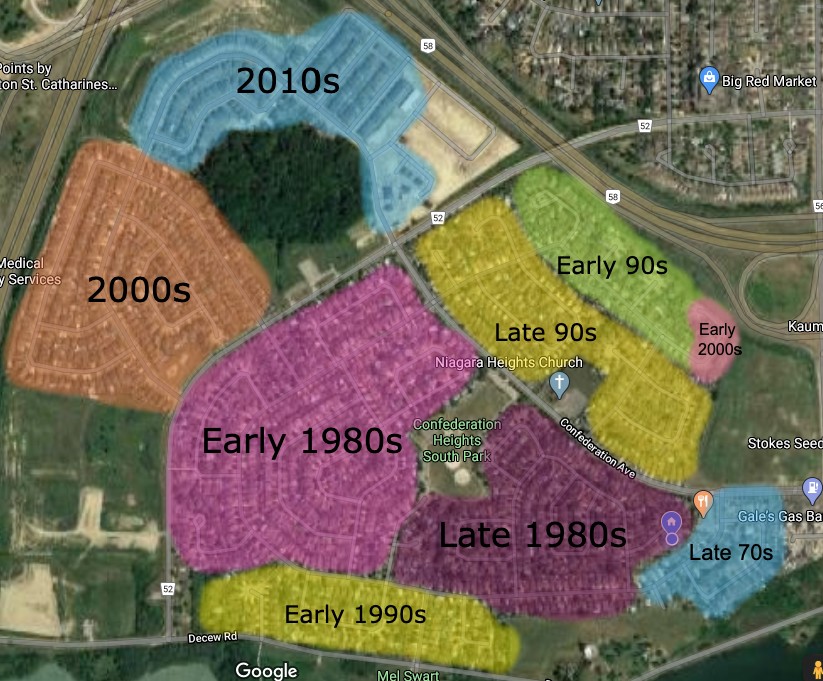 The first posts will focus on the location, the various regions of the area, and the development of those regions...

Not to be confused with the neighbourhood of the same name in our Nation’s capitol of Ottawa, the neighbourhood known as Confederation Heights occupies the North Central portion of The City of Thorold, Ontario.  It is bordered by St. David’s Road to the North, the Merrittville Highway (County Road 50) on the West, Collier Road (County Road 56) on the East, and Decew Road just off of Lake Gibson along the South. The Central Residential Residential Section is somewhat isolated.  It is accessible if you’re travelling North on Highway 406 and exit onto Beaverdams Road.  From Highway 58, the area is accessible by taking the exit to Collier Road and traveling South.  The subdivisions closest to this exit are the oldest in the area.  Just off Confederation Avenue are the subdivisions registered in 1977 including the East end of Keefer and Lampman Crescent.  The homes in this area are predominantly semi-detached and detached bungalows.

With very few exceptions the homes currently occupying the Central Residential region are single family dwellings.  Traveling West along Confederation Avenue towards Richmond Street, the subdivisions on the North side were registered in the late 1990s.  The homes in this area are predominantly detached homes between 1500 and 2000 square feet although there are pockets of smaller semi-detached homes occupying the North and East of the area.  All of the homes in this area were built by Mountain View Homes, as is the case with the majority of the homes in the Central Residential region.

The homes a little further North are slightly older.  Along Summers Drive (the portion of Summers Drive that runs parallel to Highway 58 to the North and Confederation to the South) we find subdivisions registered and built in the early 1990s.  Here we find a mix of fully detached and semi-detached homes varying in size around 1000 square feet.  The exception to this is the pocket of townhomes in the far East corner built in the early 2000s by Mountainview Homes.

Scattered throughout the area South of Confederation Avenue and East of Richmond Street we find a handful of the mostly all-brick raised bungalow and split-level homes built in the late 1970s.  We find these homes on Capri, Naples, the West end of Keefer, and on Baxter among others.  Aside from these homes, the majority of homes South of Confederation Avenue and East of Richmond Street were built in the 1980s.  The West sections were registered and built in the early 1980s, the East end in the later 1980s.  Again, these homes are predominantly fully detached homes varying in size from 1000 to 2000 spare feet.  Exceptions can be found scattered about Buchanan Crescent, Tara Crescent, and Manley Crescent that include semi-detached designs.  The largest of the homes found in the section of the Central Residential region encircled by Keefer are those on the Southern periphery, backing on to Decew Road.  These predominantly two story homes in the 200 square foot range were built in the early 1990s.

Notable standouts in the Central Residential region of Confederation Heights are the newest subdivisions including the collection of 14 homes of modern design on Beamer Court that was registered in 2014.  Also, in 2018 a subdivision was registered for a nine acre plot of land where Beaverdams Road meets Decew Road.  As of this date, no homes have been built on these lots.

Aside from Beamer Court and the yet-to-be-built homes on the Decew lot, the newest homes in the Confederation Heights neighbourhood are those found on the West side of Richmond Street.  This section is divided into two sections.  In the far East we find the large detached homes built, again, by Mountainview Homes throughout the 2000s.  The second section, occupying the leaside corner where Richmond and Highway 58 meet are the Thorold-Haven Homes built throughout the 2010s (and some of the construction continues today).  These homes are far more varied in size and structure type.  The newest of these homes are the townhomes along the Northern stretch of Winterberry.

If you're considering a move into, out of, or within Thorold's Confederation Heights neighbourhood, be sure to give me a call (905.380.5334), send me an email (darryl-murphy@coldwellbanker.ca), or DM me to take advantage of my in-depth knowledge of the area!